Of course nothing in life is ever that simple and if we had no cholesterol in our body we would be dead! Why? Because cholesterol is the base material (produced in the liver) that gets cleaved (methylated to be precise) by many dietary factors (B-vitamins etc) into all the hormones in our body (see the figure). 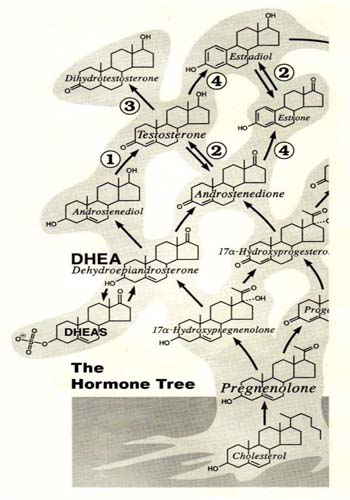 Thus, let’s pose our first question regarding ‘high’ cholesterol levels; are they high because the body is lacking its methylation agents to convert it into the necessary hormones it requires?

Since the body cannot control its own intake of food and drink (and sunshine exposure), that’s our job. The only way it can enable itself to make more of a required hormone is to produce more cholesterol.

Pregnenolone is the first steroid precursor made from cholesterol. But in order to make pregnenolone, we need adequate amounts of LDL (bad?) cholesterol plus other nutrients, including vitamin A, thyroid hormones and enzymes. Pregnenolone is made inside the mitochondria and if any of these methylation materials are inadequate, then it could induce a hormonal deficiency.

Consider then that the drug to lower cholesterol levels- statins- work by inhibiting the P450 enzyme to prevent initial cholesterol production from the liver. There are frequent reports of patients not having desired cholesterol lowering despite them using statins for long periods of time- is it because the body continues to try to make more cholesterol because it needs more hormones?

By the way, it is an important to know that statins also inhibit CoQ10 (coenzyme Q10) in the body. CoQ10 is a critical energy molecule that is required in multiple processes- and in heart health too. Studies show that if you are using statins then the lower your cholesterol levels the lower your CoQ10 levels will be too.

Some countries (like Sweden) insist on patients taking additional CoQ10 if they are using statins, some like Germany recommend it and others like the UK and US ignore it altogether! This is a disaster, if you are taking a statin we strongly recommend that you take additional CoQ10, at least 100mg to 200mg per day.

Today there are also plenty of books on the market that highlight many of the side effects of statin drugs too, which include erectile dysfunction. One example would be ‘Lipitor, the thief of memory’ which highlights another frightening example, I say frightening because of the virtual abandon that statin drugs are prescribed.

According to Rich Lippman Ph.D., cholesterol can actually neutralize one of the nastiest free radicals that can be produced in our body- the superoxide radical- and Dr. Lippman knows a thing or two because he was nominated for the Nobel Prize in medicine for his work in measuring free radical activity within the body.

Let’s be clear- we are not advocating a cholesterol rich diet for antioxidant purposes! But simply pointing out that this may be one of the body’s defense mechanisms.

Lastly on this subject, another good book out there by Dr. Malcom Kendrick is called ‘the great cholesterol con.’ His conclusion is that these factors are seen in many heart disease patients:

But they are also the same factors as seen in Cushing’s disease patients, the only difference being that Cushing’s patients are recognised as having high cortisol levels!

Listen to the experience of undergoing the magic of Ozone Therapy as described by a patient at Nulife Wellness Centre.

Designed by The Web Culture in association with Productive Solutions